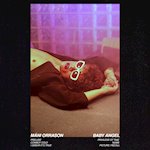 This month, Máni Orrason will release his new EP »BABY ANGEL« via Humming
Records. The 6-song-EP is about falling in love and about what happens after that.
Moving freely between dreaming and waking, pondering and letting go, it is an
impressive documentation of a development both personal as well as artistic. »I have
changed«, the young Icelander explains, »and looking back on it now, it seems like
so many things in my life have been leading up to this exact record.«
Some intense months lie behind the 20-year-old, who not only found a new love, but
also formed a new kind of work relationship with his music, by trading his singer
songwriter guitar for an electric one, in order to capture his daydreams.

»Numb« is the next teaser off of his upcoming EP, a very conscious flashback to a
previous phase – a time of straying and emotional neglect. However, the song is
written with the determination, the clear view, and the firm voice of Máni today. »I had
this desperate need to be seen and to be comforted. I guess i was really lonely at the
time«, Máni recalls. Stranded in Spain, on his own and with no support system to
back him up, he found himself longing to feel something, he slipped halfway into
adulthood and ended up spiraling down into a life of addiction and intoxication –
numbed, jaded, and permanently hungover.

How he found his way back out, is one of the most beautiful tales on »BABY
ANGEL«. »I feel more hopeful, more stable, and I feel love for so much happening
around me«, the now-Berliner says joyously. On »BABY ANGEL«, all that becomes
graspable, with all its downsides and drawbacks. The 6-song-EP covers the full
scope of big emotions – from queer infatuation on »Cowboy Cold«, fears for the
future on »I Swear It’s True«, and frustrations on »Numb«, all the
way up to questions about sense and self on »Picture I Recall«. What’s next you
ask? According to Máni, more craziness and even more pop. Or maybe not? One
thing is for sure: This artist remains on the move.

Almost five years have passed since Máni Orrason became famous over night in his
home country Iceland. Out of nowhere, the then 16-year-old popped right into the
center of the music world’s attention with his pop-folk hit »Fed All My Days«, securing
him his first festival slots. Already his debut album »Repeating Patterns« and the
follow-up EP »Wake Me Up« testified to his musical excellence. »BABY ANGEL«
shows an – in the most positive sense of the word – exceptional emerging artist, who
is not only ahead of his age, but increasingly also ahead of the times.